This came on the same night that Iran fired over a dozen missiles at US bases in Iraq.

Al Hadath Dubai News reported a missile took down the Ukrainian flight after the crash on Wednesday.

Ukrainian officials on Thursday said they want to investigate the crash site for missile parts after images appeared on the internet.

And photos of the Ukrainian flight show shrapnel damage on the wings and fuselage. 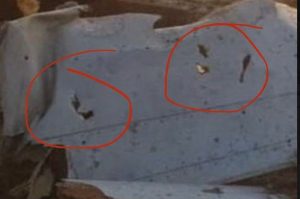 On Thursday— US OFFICIALS ANNOUNCED THEY ARE CONFIDENT THE UKRAINIAN JETLINER WAS SHOT DOWN!

#BREAKING: @CBSNews has learned U.S. officials are confident that Iran shot down a Ukrainian jetliner in the hours after the Iranian missile attack on U.S. targets.

176 people were killed, including at least 63 Canadians. pic.twitter.com/g149hAcui0

And on Thursday afternoon Canadian Prime Minister Justin Trudeau told reporters there is evidence the Ukraine airliner that crashed in Iran — killing 176 people including 63 Canadians — was shot down by an Iranian surface-to-air missile. full story

About Rhett October 1124 Articles
Rhett October is a man independent of the nanny state. He sees what is obvious but to many others is a successful deception. He has a crush on Tomi Lahren. Follow him on Twitter @RhettOctober "After this, there is no turning back. You take the blue pill—the story ends, you wake up in your bed and believe whatever you want to believe. You take the red pill—you stay in Wonderland, and I show you how deep the rabbit hole goes. Remember: all I'm offering is the truth. Nothing more." -Morpheus
Facebook Twitter Google+

Texas Gov. Greg Abbott has told the Trump administration that he doesn’t want his state to participate in the federal government’s refugee resettlement program, making his state the first to opt out. In a letter […More]

Flashback to 2011 when now Speaker of the House Nancy Pelosi said Obama “did not need authorization” to use force in Libya. This contrasts with her current criticism of President Trump’s decision to kill Iranian […More]