NAPLES, Fla. – An elementary school teacher in Collier County, Florida was reassigned to administrative duties over a Facebook post during the “Day Without Immigrants” protest last Thursday.

Parkside Elementary School computer lab instructor Veronica Fleming linked to a Chicago Tribune story about the nationwide protest and offered her take on the situation.

“The funny part about immigrants staying home is the rest of us who pay for them are here at work like we’ve always been. Looks like less mouths to feed today. Have fun while you still can. So glad to hear about massive deportation. Let’s make America great again. Thanks Donald Trump!” 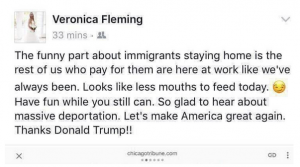 “This is a very tight-knit neighborhood school that stands for inclusion,” he said. “The teachers have nothing but love for these students. Anything else is not a reflection of the school.”

Juanita Perez, an immigrant mother of two, told NBC 2 she was “offended” by Fleming’s online comments.

“My feelings are hurt for our kids,” she said. “I couldn’t even believe it. How could a teacher speak like that?”

“I was mad. Really, really mad,” said Gabriella Marquez, whose two children are in Fleming’s class. “I would consider it really to be racist.”

District officials removed Fleming from the classroom and reassigned her to the district administrative center while they investigate, Parkside principal Tamie Stewart told NBC 2. full story

Will schools start reassigning all the teachers who spoke against President Trump directly to their classrooms?

About Rhett October 1061 Articles
Rhett October is a man independent of the nanny state. He sees what is obvious but to many others is a successful deception. He has a crush on Tomi Lahren. Follow him on Twitter @RhettOctober "After this, there is no turning back. You take the blue pill—the story ends, you wake up in your bed and believe whatever you want to believe. You take the red pill—you stay in Wonderland, and I show you how deep the rabbit hole goes. Remember: all I'm offering is the truth. Nothing more." -Morpheus
Facebook Twitter Google+

Not very far in the past, online classes were viewed as increasingly the domain of the “sometime down the road” swarm. The statistic that further their training after years in “this present reality”. Numerous online […More]

A 70-year-old Philadelphia grandma shot and wounded an alleged home intruder around 4:30 a.m. on Saturday morning. The grandma, Maxine Thompson, spoke to Fox 29 after the fact and stressed that people are going to […More]

By Russ McSwain It’s been drilled into everyone that “past performance is no guarantee of future results.” That piece of wisdom is a double-edged sword. Most Trump critics, be they Democrats or NeverTumps, miss the […More]