Last week, Paul was the only Republican to vote against the budget which would repeal the Affordable Healthcare Act after expressing his displeasure because it endorsed huge budget deficits. He wasn’t the only one to have expressed anxiety over dismantling the law without a replacement to show voters, FOX News reports.

Sen. Susan Collins, R-Maine, said she wants at least to see “a detailed framework” of a GOP alternative health care plan before voting on repeal. She said Republicans would risk “people falling through the cracks or causing turmoil in insurance markets” if lawmakers voided Obama’s statute without a replacement in hand.

Congressional Republicans took the first step Friday to dismantling President Barack Obama’s trademark healthcare law. The Senate voted 51-48 for a budget that eased the way for action on subsequent repeal-legislation as early as next month. The House voted 227-198 in favor of the move on Friday.

The budget “gives us the tools we need for a step-by-step approach to fix these problems and put Americans back in control of their health care,” House Speaker Paul Ryan, R-Wis., said after the vote.

Congressional Republicans have made annulling Obama’s law and replacing it a top goal for the past seven years. GOP rifts and an Obama veto prevented them from achieving anything other than holding scores of votes that served as political messaging.

President-elect Donald Trump has made ObamaCare a primary target during his campaign. At his news conference Wednesday, Trump said his upcoming plan will be “far less expensive and far better” than the ObamaCare.

FOX reports that many Republicans have insisted on learning how their party will re-craft the nation’s $3 trillion-a-year health care system before voting to void existing programs.

There are internal GOP chasms over Republican leaders’ plans to use their bill to halt federal payments to Planned Parenthood and pare Medicaid coverage. There are also disagreements over how to pay for the GOP replacement, with many Republicans leery of Ryan’s proposal to tax part of the value of some health insurance provided by employers. full story 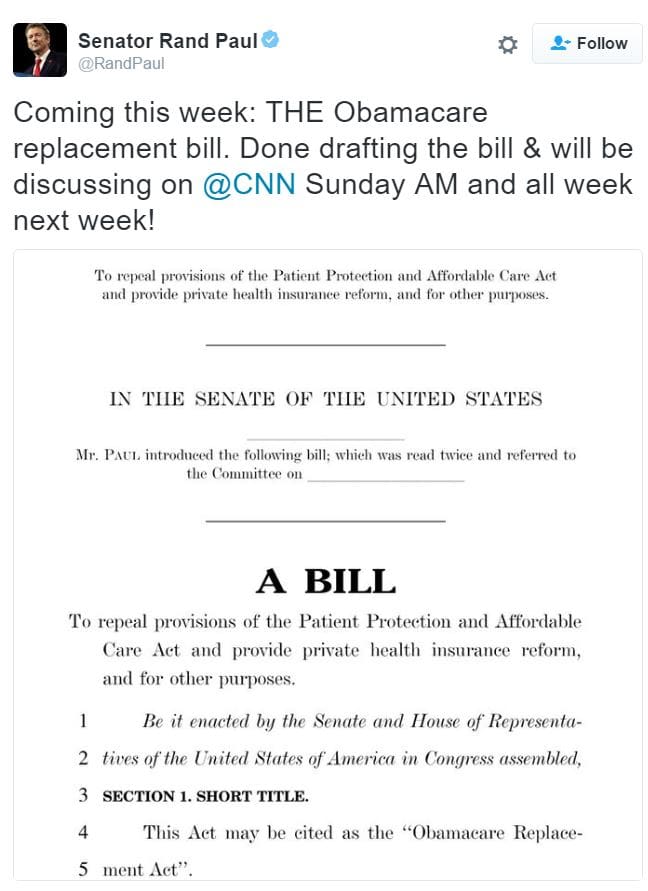 Rand Paul: The Failure To Repeal Obamacare Means Premiums Will Continue To Skyrocket

Sen. Bernie Sanders (I-VT) is set to unveil a plan that would give American workers who want or need jobs guaranteed government jobs that pay at least $15 per hour and have health benefits. The […More]

Only 14 percent of registered voters strongly oppose President Donald Trump’s border-security reforms, despite the establishment media’s depiction of the reforms as a “Muslim travel ban.” In contrast, the policy is strongly supported by twice […More]

Jews have been advised not to wear their kippah scullcaps in major German cities after another violent assault that targeted a person wearing the traditional Jewish headpiece. Josef Schuster, the head of Germany’s Central Council […More]