As wildfires roar in east Tennessee, forcing thousands of people to evacuate, people still upset over the election of Donald Trump are mocking the plight of Tennesseans. Some even posted that east-Tennessee residents deserve to have their homes, businesses, and forests burned down for voting for Donald Trump.

The Tennessee areas engulfed in the wildfires are the towns of of Gatlinburg and Pigeon Forge which are popular holiday resorts for families from the region. They are known for the family-friendly, country-music themed, and pro-Christian attractions and activities including Dollywood, the theme park of famed country music singer Dolly Parton. The area is also known for log cabin getaways high atop the Smoky Mountains, many of which have burned to the ground.

Some of the tweets, instead of expressing condolences, prayers, or shock, are saying outrageous, heartless things such as, “let them burn” and “too bad it’s not the whole state burning.” The tweeters are also accusing residents of showing their “white privilege” because they want more news coverage of the fires. This in spite of near 24-hour coverage of natural disasters such as floods that have occurred in other states. 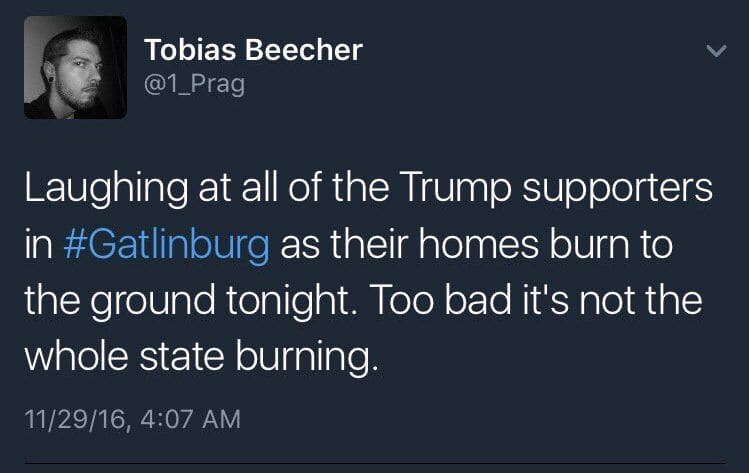 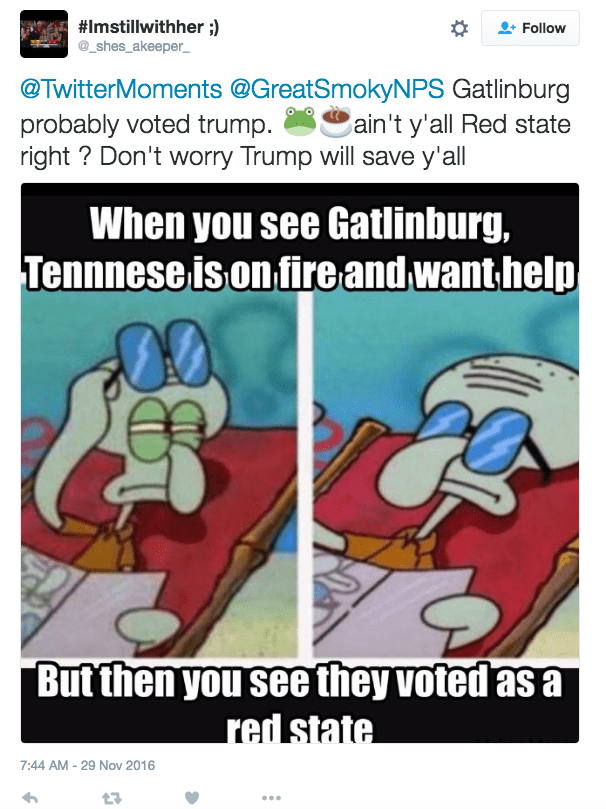 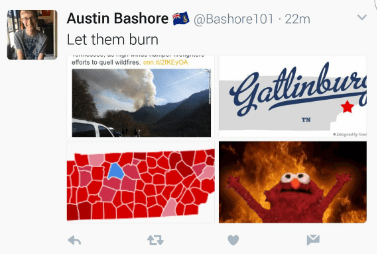 Michael Ian Black, a popular left-wing comedian, tweeted saying: “When Trump supporters voted to ‘burn it all down,’ I bet they didn’t think it would start with Tennessee.” 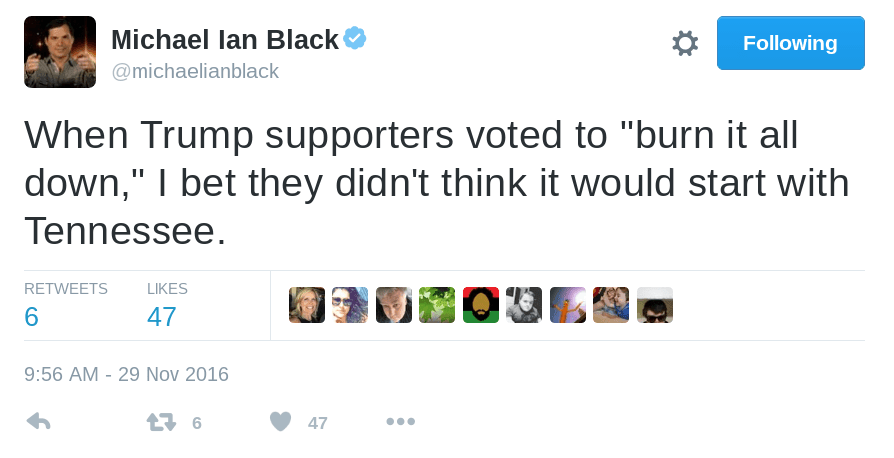 This sparked a wave of responses attacking Black for being insensitive, resulting in him deleting the tweet and apologizing.

So much for the “Love Trumps Hate,” mantra that the left arrogantly wore as a self-proclaimed, baseless badge of honor during the election. Share this on Facebook so we can show who the real haters are.

About Rhett October 1056 Articles
Rhett October is a man independent of the nanny state. He sees what is obvious but to many others is a successful deception. He has a crush on Tomi Lahren. Follow him on Twitter @RhettOctober "After this, there is no turning back. You take the blue pill—the story ends, you wake up in your bed and believe whatever you want to believe. You take the red pill—you stay in Wonderland, and I show you how deep the rabbit hole goes. Remember: all I'm offering is the truth. Nothing more." -Morpheus
Facebook Twitter Google+

Sen. Bernie Sanders (I-VT) is set to unveil a plan that would give American workers who want or need jobs guaranteed government jobs that pay at least $15 per hour and have health benefits. The […More]

Only 14 percent of registered voters strongly oppose President Donald Trump’s border-security reforms, despite the establishment media’s depiction of the reforms as a “Muslim travel ban.” In contrast, the policy is strongly supported by twice […More]

Jews have been advised not to wear their kippah scullcaps in major German cities after another violent assault that targeted a person wearing the traditional Jewish headpiece. Josef Schuster, the head of Germany’s Central Council […More]