Hillary Clinton’s campaign lawyer announced plans to participate in vote recounts of Wisconsin, Pennsylvania and Michigan if they take place, yet doesn’t expect to overturn the election of Donald Trump as president.

If Green Party candidate Jill Stein initiates recounts in all of those states as she intends, the Clinton campaign “will participate in order to ensure the process proceeds in a manner that is fair to all sides,” lawyer Marc Elias said Saturday in a post on the blogging website Medium.com.

Stein says on her website that she’s raised more than $5.7 million for her recount effort so far, with a $7 million goal. The funds raised so far will cover costs in Wisconsin and Pennsylvania. full story 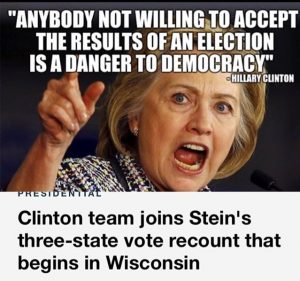 About Rhett October 1170 Articles
Rhett October is a man independent of the nanny state. He sees what is obvious but to many others is a successful deception. He has a crush on Tomi Lahren. Follow him on Twitter @RhettOctober "After this, there is no turning back. You take the blue pill—the story ends, you wake up in your bed and believe whatever you want to believe. You take the red pill—you stay in Wonderland, and I show you how deep the rabbit hole goes. Remember: all I'm offering is the truth. Nothing more." -Morpheus
Facebook Twitter Google+