The story of the Obama administration sending $770,000,000 in taxpayer money to rebuild and even expand mosques in foreign countries broke in October and enraged taxpayers everywhere. The question coming from taxpayers who were flipping the bill for foreign mosques but often struggling to pay their own bills was, ‘How could we afford to send such sensational, fairy-tale sized money to a foreign country while our infrastructure crumbles, our veterans starve, our job participation rate is at one of the lowest levels ever, and while our national debt stands at never before seen, record levels?’

This spending splurge was part of Obama’s record $2.4 trillion spending spree for this year which only sends our national debt up to levels beyond the value of our entire economy. Most people do not understand what that means or how that will affect them and their descendants in the future, but even that is not entirely the issue of focus for this post.

Rather, one question I have that should send chills down the spine of every American is this: Is there no separation of mosque and state? All we hear from the left, and time and time again from Obama is that America is not a Christian nation and that there is a separation of church and state. We’re told that prayer in schools is not allowed unless it is regularly scheduled Muslim prayer. We were told that a Bible club was not allowed in a public school but that a Satanist club and a Wiccan club was. The list goes on. But could you imagine the outrage from the left if President Trump or a President of the past would’ve spent $770,000,000 to rebuild church buildings….in our own country? We would’ve seen protests with people holding signs saying there was a “separation of church and state,” and that no one should be forced to fund religion with their tax dollars.

A story made the rounds in 2014, showing left-wing outrage that churches were allowed to be tax exempt organizations. It was said that such a tax exemption “cost” the United States around $70 Billion dollars per year. Never mind that Planned Parenthood is also a tax exempt organization who also directly receives taxpayer dollars. How much does that cost Christian taxpayers who believe that abortion is murder? Pushing $1 billion per year. And, what’s more, how can an organization not paying taxes “cost” the U.S. anything? Where did we get this idea that the government was not “for the people,” but instead was some predatory entity that saw organizations and taxpayers as sources of income? The U.S. government should exist to protect the liberty of the people, and that should include financial liberty, at as small a cost to the people as possible. But that’s typing for another time. 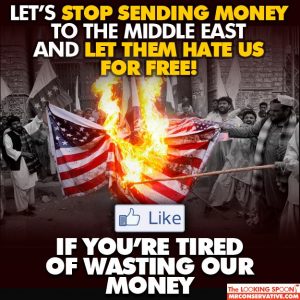 The issue remains, why is it acceptable to the left or anyone for our colossally indebted country to spend unthinkable amounts of money to enhance religious institutions in foreign countries? If anything, should such an expense be invested in our own country? No! We can’t even afford that and our irresponsible President and government should stop inventing ways to spend us further into financial ruin especially when the investment is not even within what’s left of our own borders.

What is going on with this administration? Why does it not seem to care about us in the least? Tax dollars to Iran, to the Muslim Brotherhood, to make mosques better in Islamic countries, but U.S. churches not paying into the government is a problem? Surely I don’t need to connect the dots. It is great for liberty and for our country’s financial solvency that the Obama administration’s days are coming to a close, but what will foreign mosques do without the income? Hate us for free?

About Rhett October 1170 Articles
Rhett October is a man independent of the nanny state. He sees what is obvious but to many others is a successful deception. He has a crush on Tomi Lahren. Follow him on Twitter @RhettOctober "After this, there is no turning back. You take the blue pill—the story ends, you wake up in your bed and believe whatever you want to believe. You take the red pill—you stay in Wonderland, and I show you how deep the rabbit hole goes. Remember: all I'm offering is the truth. Nothing more." -Morpheus
Facebook Twitter Google+